Liviu Dragnea, the leader of Social Democrat Party (PSD) at the National Anticorruption Department (DNA) in Bucharest on November 21, 2017. Romanian anti-corruption prosecutors have seized assets worth more than 27 million euros belonging to Dragnea, they announced on November 21, 2017. This decision comes in the context of a survey on, among other things, the use of European funds, this strong man of Romanian politics being suspected of abuse of power and the use of forgeries. / AFP PHOTO / ALEXANDRU DOBRE (Photo credit should read ALEXANDRU DOBRE/AFP/Getty Images) 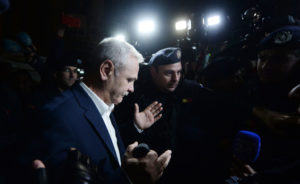